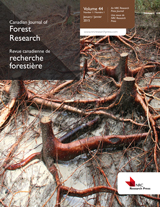 Abstract: Forest ecosystems in eastern Canada are particularly sensitive to climate change and may shift from carbon sinks to carbon sources in the coming decades. Understanding how forest biomass responded to past climate change is thus of crucial interest. But past biomass reconstruction still represents a challenge. Here we used transfer functions based on modern pollen assemblages and remote sensed biomass estimation to reconstruct and quantify, for the last 14 000 years, tree biomass dynamics for the six main tree genera of the boreal and mixed-wood forests (Abies, Acer, Betula, Picea, Pinus, Populus). We compared the mean genera and total biomass to climatic (summer temperatures and annual precipitation), physical (CO2, insolation, ice area) and disturbance (burned biomass) variables, to identify the potential drivers influencing the long-term trends in tree biomass. Tree biomass was for most genera related with summer temperature, insolation and CO2 levels; Picea was the exception and its biomass also correlated with annual precipitation. At the onset of the Holocene and during the Holocene Thermal Maximum c. 10000-6000 BP), tree biomass tracked the melting of the Laurentide Ice sheet with high values (>50 t.ha-1 and a total of 12 Pg). These values, in the range of modern forest ecosystems biomass, indicate that trees were probably able to survive in a periglacial environment and to colonize the region without any discernible lag by tracking the ice retreat. High biomass at the beginning of the Holocene was likely favoured by higher than present insolation, CO2 levels higher than during the Last Glacial Maximum, and temperature and precipitation close to present day levels. Past tree biomass reconstruction thus brings novel insights about the drivers of postglacial tree biomass and the overall biogeography of the region since the deglaciation.